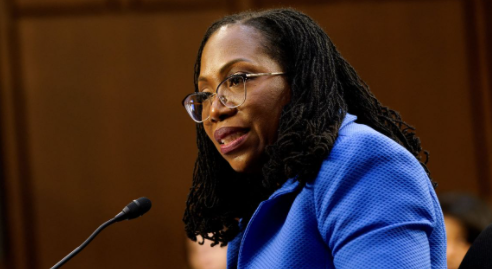 Judge Jackson is the current front runner to fill a soon to be vacant Supreme court seat. The seat in question currently belongs to Stephen Breyer who among the so-called “liberal judges” seems rather moderate compared to who may potentially replace him. Let me be perfectly clear about my position on this. I am a firm believer in Constitutionalism and the protected freedoms it insures. Unfortunately, my betters in American society are not Constitutionalists and this is creating a a soon to be untenable situation for the American people. The fact of the matter is while me and my fellow Constitutionalists are against the politicization of the court as a matter of principle. Our betters have politicized it and they have done so very nefariously.

Blue-Anon cultists spent the entirety of both the Supreme court nomination’s of Amy Coney Barrett‘s and Brett Kavanaugh by engaging in targeted harassment campaigns. Both were outrageous and bordered on outright struggle sessions. The less egregious instance was when Democrats insisted that being a catholic and a mother disqualifies one from being an objective Judge. Which was such an insane claim that even NPR called them out on it.

The more egregious instance was when the very same Blue-anon cultists insisted that Justice Brett Kavanaugh was a gang rapist because his Senior quote on his high-school yearbook was an edgy joke and he drinks beer. The story was more complicated then that but that was the supporting evidence. Ms. Ford (the first one) could not recall any basic details including where it was, when it was, how old she was when it happened, how it happened, and none of the people she said attended the alleged party say the party actually happened. Despite all of these flaws, the democrats ran with, “Brett Kavanaugh is a gang rapist because I believe all Woman, with comeplete disregard of the Constitutional rights of the accused “. That is what Republican’s are up against and the only reason they aren’t fighting back is because Republican’s still view their opposition as the Nobel Opposition.

PEDO ALERT: Judge Ketanji Brown Jackson is now defending her record of being soft on sentencing child pornographers, she argues some aren’t as bad as others due to how much they look at

Senator Blackburn: “Can you provide a definition for the word woman?”

The videos above demonstrate either Justice Jackon’s supreme incompetence or supreme evil. Those are the only ways you could properly interpret the sheer insanity of these statements. First of all the black-Hebrew Israelites are not a group of spiritual vegans. They are an anti-semetic Black-Nationalist Group that has been terrorizing Jewish people and other people for years. Simply for not having the correct skin color or heritage. Secondly, Ms. Jackson is one of our educated betters the reason she is refusing to define the word Woman is for ideological reasons. Moreover, the same goes for why she gave lenient sentences for people with child porn on their personal devices. She is an ideological agent and it has clearly effected her rulings as a judge.

If one takes into consideration not only Jackson’s own statements, but also the democrat reactions to previous attempts by the previous administration to put justices on vacant seats in the Court. You could only come to the conclusion that this is the new battlefield for Supreme Court nominations and the fact that Republicans aren’t doing even a tenth of what democrats did to them is baffling. Do they even have a sense of Pride or Honor? The answer to that question is no.