The western world is at a crossroads. The past is repeating in the worst of ways. We did not learn our lessons from history, yet I will not sit back and let the unrivaled horror of the 20th century repeat.

The words Nazi and Germany invoke a well justified sense of horror, grief, despair, and anger among many things, when one puts them together. This is well justified and the imagery of this horror we all experience in our elementary classrooms is evident in our cultures moral proclivity towards stopping them at all costs. If someone were to refer to oneself as the “übermensch” and onto the other the “untermensch”. You would know exactly the type of person they are. Unfortunately, we have forgotten this lesson and instead our natural instincts are packaged and sold to us. We have truly learned nothing.

The reality of Canada’s (and maybe even the Western world more broadly) perilous situation. Would be the creation of two new and different classes of people. The Untervaxxed (unvaccinated people) and the BoosterRace (Those who are gloriously deemed “fully vaccinated“). The Canadian truckers are fighting back with peaceful and persuasive protest. Against state propaganda and the new Hitler youth. They strive for their freedom and their agency.

Let us observe a few case studies so I may demonstrate what I mean.

The video above before you is something quite chilling. However, if it refuses to play I will quote the parties involved directly.

The children are asked: “What should we do with people who don’t want the vaccine?”

To which the little boy states, “We should call the police!”

The young girl followed up stating, “If they don’t have the vaccine, it can make a lot of people in danger, so like what the government does right now. We should cut everything from them little by little until they submit and get vaccinated.

One Woman presumably her mother can be heard saying, “it looks like I drill them”.

The live crowd can be heard applauding the answer, with the show host goading them on further, commenting “it looks like we got some future politicians here.”

Let us be perfectly clear about one thing. These are children and children are kind and innocent unless they are groomed as ideological agents. As a Californian who completed k-12 schooling and nearly done with collage. I know this all too well. I would imagine these formerly innocent children had questions for their mother when she “drilled them”.

In an Interview on Local Ohio Television the following exchange between the current president and a media pundit occurred.

This is a strange comment especially considering the vast majority of those who have contracted the Omicron Variant are vaccinated against Covid-19. We have been told by the CDC that the Covid-19 vaccine does not prevent transmission. In-fact according to another Israeli study the 4th dose of this Covid-19 vaccine is not very effective against Omicron.

Since the evidence does not support his claim it must be Joe Biden’s Prejudice. That is responsible for this discriminatory rhetoric and where has this discrimination brought us. The vulnerable and the elderly are being denied lifesaving treatment because of their medical status.

Shamgar Connors, an American, a father, and a husband. Recorded medical staff saying they would deny him lifesaving medical treatment because of his medical condition. Stage 5 focal segmental glomerulosclerosis. A disease that has no cure.

During his struggle session with the staff that can be heard saying, “OK, so this may be a crossroads that your, um, at your evaluation, because I don’t –  that’s not – there’s not going to be any exception to that. The science is pretty clear on the vaccine and we are requiring it” . Connors had already been on the transplant list for three years. However, because he is the Untervaxxed he is denied Life, Liberty, and the pursuit of happiness.

In Canada their “glorious Leader” Justin (Blackface) Tredeau called Unvaccinated people “Racist and Misogynistic Extremists”. What does medical status have to do with racism? What does Misogyny have to do with medical status? The answer is absolutely nothing as reality would have you believe. However, this is not why Justice Blackface Tredeau made that claim. The true reality of this mans claim is to denounce genuine grief the Working and Middle-Class Canadians have with government policies. It is of my experience that baseless accusations of “Isms” and “Ists” exist only to create shields for the powerful. I remember my last few years of high-school where I was surrounded by my rich peers in designer cloths and holding the latest iphone lecturing me about my alleged “white privilege”. Justin Blackface Tredeau comes from money, is surrounded by money, whose interests concern only those with money.

The video above shows a family of 4 being evicted from a Ronald McDonald Medical institute because of their medical status.  The 4 year old child with leukemia as shown in the hospital will be evicted soon because him and his parents have not yet adhered to the will of the state.

You can here the father pleading to the MidWit, “This is my boy, he has had all his vaccines, we are not anti-vax”. You can hear the MidWit later appealing to the “sound Science” of this mandatory medical procedure. As she kicks a child with cancer out of a cancer treatment center.

The Man featured above is named DJ, Ferguson. Due to a hereditary heart disease he requires a new one in order to survive. However, just last week he was denied this due to his medical status.

In a “scientific letter” by Emanuel Goldman titled, “How the unvaccinated threaten the vaccinated for Covid-19: A Darwinian perspective” (which says all you need to know). Goldman uses a plethora of emotion appeals referring to the “legacy of the unvaccinated”  and in a self declared “crueler calculus” he says, “The unvaccinated will either get sick and survive, and therefore be the equivalent of vaccinated, or they will die and therefore be removed as breeding grounds for the virus.”. I should wonder if Goldman even understands the historical significance of “Darwinian Perspectives” regarding minorities.

In an Opinion Editorial from the LA times Michael Hiltzik titled, “Mocking anti-Vaxxers’ COVID deaths is ghoulish, yes- but may be necessary”. Hiltzik makes many claims. One of these claims is, “Obviously, the mandates exist because these diseases threaten not only infected persons themselves, but the community, meaning anyone they come in contact with. That’s the folly of the anti-mandate argument: It places a perverse conception of individual “freedom” in opposition to the communal interest.” This is the main crux of his argument. That you should give up your agency in favor of the “collective”.

The hallmark of all civilized thought is that death is tragic. Even ancient societies knew this. Despite this Hiltzik takes a self appointed, “Different approach” He even includes all of the various sites where you can “Dance on the graves on anti-vaxxers'”. Which is quite fitting considering the original Headline of the article is question was called, : “why shouldn’t we dance on the graves of  Anti-Vaccers'”.

The data does not add up. Their is no reason for this level paranoia and malfeasance. Canada has had nearly 80% of its population fully vaccinated. It’s Border country the United states (of which I hail) has over 70% of it’s population double vaccinated. Moreover, this does not even consider the people who had Covid-19 previously and developed some form of immunity. Immunity of which according to an Israeli study seems to be preferable to vaccination.

Why tell Americans on national television that they must “Disinvite unvaccinated family members during Christmas“?

Why must Californians face the boot of the state for doing what is otherwise lawful activity? While violent crime and theft is worse than ever before.

The answer is the same for these questions and everything mentioned previously. Be it selective enforcement, the denial of medical treatment of the most vulnerable in the name of protecting them, and the war adjacent and discriminatory rhetoric. The western world has allowed the evils of totalitarianism to seep into the realms of power. No institution is safe so it is up to us to stop the colonization of the free-world.

If I must Choose then I choose Justice: 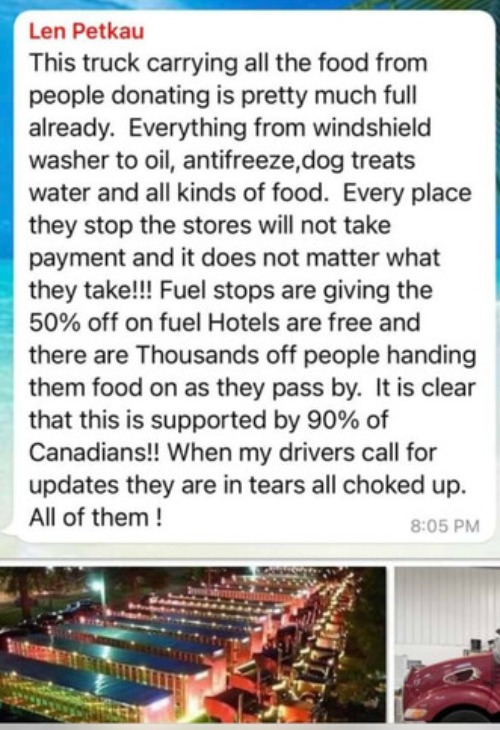 The Crowd funding platform GoFundMe denied the working and middle class equal access to the public square. A few days ago by withholding funds raised via 77,000+ individual donors via crowdfunding. When asked as to why a spokeswoman said, “We require that fundraisers be transparent about the flow of funds and have a clear plan for how those funds will be spent. In this case, we are in touch with the organizer to verify that information,”.

The GoFundMe page was created in order to give Working-class truckers money for food, fuel, and other costs while they protest (which they have for over a week now)

Luckily this has not stopped them as they have shown their resolve in a small town, and genuine communal fashion.

The video above features Justin Blackface Trudeau calling the truckers for freedom protest a ,”fringe minority”. Well this “fringe minority” is 50,000 strong in Canada Alone. They have committed no violence and done nothing wrong. They advocate for their own liberty and justice is on their side. The BoosterRace needs to understand that they are not superior to us. I side with the working and middle-class people who live their own lives. Outside of and against the ethical agenda of the BoosterRace. They may protest during the winters of Canada but we may warm their hearts in solidarity.

3 thoughts on “I side with the Canadian Truckers and You Should Too.”