“Anyone else remember the war on terror?”

As part of ANN’s ongoing coverage of the Russia and Ukraine conflict. I have noticed a bombardment of both weaponry and propaganda. How can a generation that grew up with generation defining lies not see this for what it is? The internet grants us with infinite knowledge at infinite convenience. So why don’t the vast majority of us seem to use it? Or at the very least use it along with using our brains.

The 7 minute video above is a production called The War of Chimeras. It is a war propaganda film that aired in 2017. The film in summary according to IMDb says, “The story of war, love and death that was documented by the immediate participants of events. Off screen and later on it are the two – a boy and a girl. He volunteered for the front; she went to the place just after the battle. He got into Ilovaysk cauldron, lost his closest brother-soldiers. She, while travelling along the ruined towns, strives to understand the essence of war and love. Both tell openly one another about their feelings during the war, escaping the cauldron, a try to live together after, and a common trip to the frontline.”. Furthermore, the propagandists whoever they are didn’t try to hide this very well considering it is taken from the first 15 seconds of the film.

Here is the capital of Ukraine: scenes of anxiety, farewell, love … pic.twitter.com/rjB2RWkFS9

On a very similar note a viral photo showing children giving a salute and sendoff was actually a photo taken in 2016. The Ukrainian News agency UNN has used this photo a plethora of times in 2016.

Not Quite black Widow:

This viral story of a Ukrainian Model depicts a Ukrainian Woman named Anastasiia Lenna. In which she is seen holding a rifle with a pink gun sight, and in perfect lighting with a disheveled building behind her. 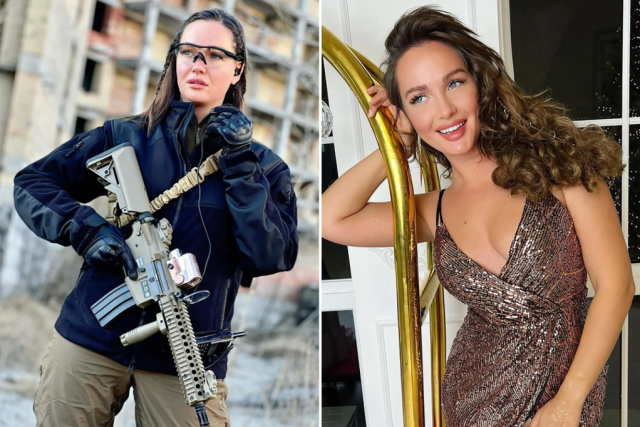 Similarly to the inherently anti-camouflage design of a pink gun sight.  The gun itself turned out to be not designed for war as it is an airsoft rifle. Specifically, the Specna Arms Daniel Defense MK18 SA-C19 CORE Airsoft Rifle. Which is available for just under $200 before shipping and handling. But wait, there’s more.

Planes shooting down Planes in aerial combat is not a novel concept:

The “Ghost of kiev” as has been called by many. Turns out to be from a video game called Digital Combat Simulator.

Ukrainian pilot who is 6-0 shoots down a Russian Su-35 with his Mig-29. He’s been nicknamed the ghost of Kyiv, and is the first pilot since WW2 to achieve ace status! pic.twitter.com/WsoadzLrdQ

This story revolves around thirteen Ukrainian border guards on an island in the black Sea called Snake island. The viral video depicts Ukrainian soldiers telling Russian soldiers to “go f*** yourselves” when the Russian ship threatened to open fire on the island. The story told by the corporate press was that they died a noble and honorable death. Turns out however they survived.

The problem with these feel good stories is that they are textbook propaganda. Ukraine is less militarily capable than Russia. This means that in any conflict with Russia Ukraine must win the hearts and minds of all. They must build up moral for their troops, their people, and their allies. However, that does not mean that Russia is not also engaging in a propaganda war of its own. Which I will cover on a later date. I suspected that the stories above had some elements of fabrication. However, they have entered a mythos entirely of their own. In-fact some are now suggesting that the mythical ghost of Ukraine is now a “trans woman“. The mythos will just keep building and building until it is supplanted in the culture. And another generation will be defined by a lie.

My generation has been defined by quite a few lies. There are some out there who believe that the previous president was both a Russian spy and a Ukrainian puppet. The most incompetent president ever and yet, an evil genius trying to rig the 2020 presidential election by stealing mail boxes. Who only won in 2016 because of Evil Russian bots. Also the 2020 election is the most secure election in history and if you question it then you are an evil alt-right nazi conspiracy theorist MAGAT Fascist. Moreover, this doesn’t even encompass the war on terror or 15 days to slow the spread. My generation, Generation Z has been inundated with propaganda our entire lives. Please forgive me for deciding that I shall fall for the Gaslighting abuse from these Evil people no longer.

Something else you may find interesting

Watch: Trump Announces 2024, “I am tonight announcing my candidacy for President of the United States”.

Watch: Trump Announces 2024, “I am tonight announcing my candidacy for President of the United States”.

The Long History of Democrat Deplatforming Stretches Back to the 1830s

3 months ago
Big Tech colluded with DHS to prevent ‘disinfo’