The White House under the Biden Administration is using TikTok stars in order to push pro-war propaganda. Last week multiple TikTok stars and the tens of millions of followers there of, have been inundated with said propaganda. My Generation is the most propagandized generation in history and the ongoing coverage of the Russia and Ukraine crisis has only added to that reality.

TikTok stars have more access to the Biden White House than the American people. https://t.co/8xCY0jxEqe

The first of these TikTok stars is @kahlilgreene who begins his propaganda video by very enthusiastically saying, ‘I have just gone off the phone with the white house.”. I have provided the rest of his video below. He has nearly 555,000 followers and is currently being used by the neo-Conservative Neo-Liberal uni-party to push pro-war propaganda.

Other TikTok stars recieved what appears to be the same call. Now with their newly acquired talking points they are free to proselytize my generation into believing the establishment narrative.

The White House told the TikTok influencers who were invited on the zoom call to blame the high gas prices on Putin. pic.twitter.com/qBCEA6r2C7

This is not the first time the Biden Administration has a habbit of exploiting TikTok stars to encourage their agenda among my generation. 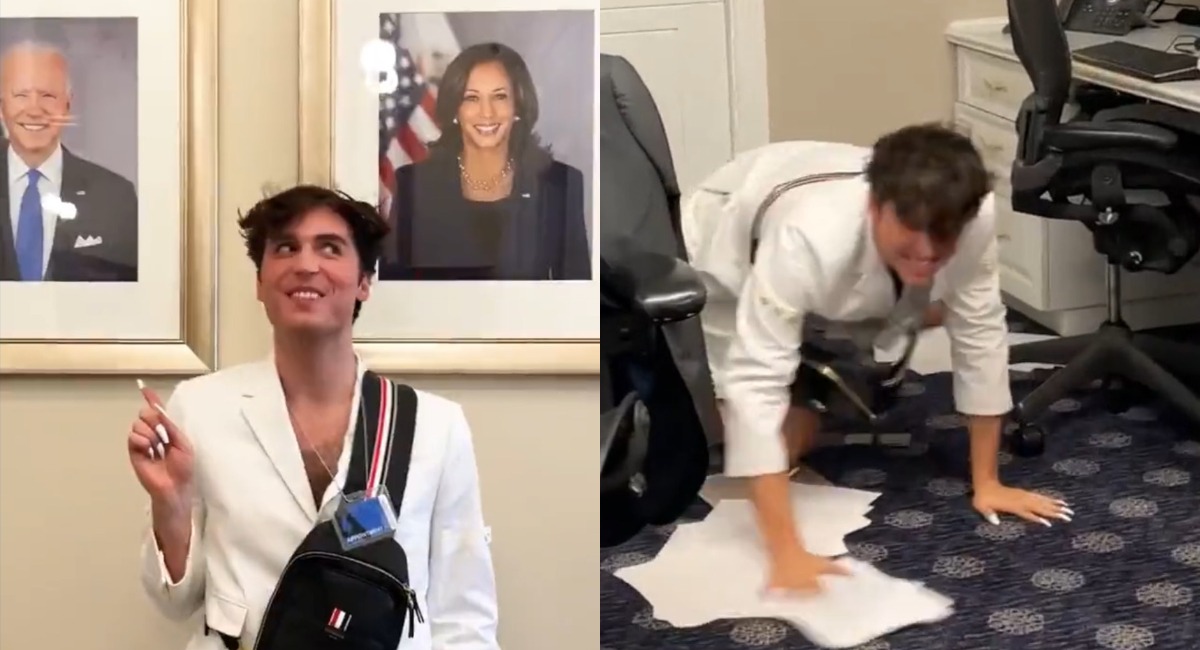 The Biden Administration has used the child above to not only push the governments agenda regarding infrastructure but also the governments agenda regarding the Covid-19 vaccine roll-out. The Washington post reports, “Biden has increasingly sought online creators to sell major policy initiatives. The administration worked with dozens of top TikTok stars last year to encourage vaccination. He also hosted a briefing for influencers to educate them about his infrastructure plan. To emphasize the child-care components of his “Build Back Better” initiative, he sat for interviews with two parenting influencers on Facebook Live and YouTube.” and that is exactly what is happening.

This is not the first time something like this has happened and it wont be the last. The #marchforourlives event in 2018 is quite similar and equally sinister.

The Child above is named David Hogg. Who was hailed by our betters in society as one of the parkland shooting survivors. His story however, tells a different tale. In an interview on a corporate press outlet David Hogg says, ‘On the day of the shooting, I got my camera and got on my bike and rode as fast as I could three miles from my house to the school to get as much video and to get as many interviews as I could because I knew that this could not be another mass shooting.’. We know this and the reason is because these are his own words. The answer is because David Hogg much like these TikTok stars are the approved instruments for change. They have been given the approved lines for the approved rebellion disseminated from our societies betters. He is part of a religion of hate and while his 15 minutes of fame have been long sense up. Nevertheless his impact and indeed the impact the TikTok stars will have on our generation is nothing more than robbing us of our political willpower. David Hogg was used by the corporate press and transformed into a symbol for the upper middle class, coastal elite; who have nothing but contempt for me and my generation. Yet, they will continue to create our symbols and our rebellion for us. I for one am a member of Generation-Z and I am pro-second amendment. I for one am a member of Generation-Z and I am against the Biden Administration for their direct involvement of gas prices in the united states (among other things). I am a member of Generation-Z and the weapons of my betters do not represent me.

This Article is part of an ongoing series called Generation Lied to.

Something else you may find interesting

2 months ago
Is the Validity of Time Travel Necessarily a question of Science?

Is the Validity of Time Travel Necessarily a question of Science?